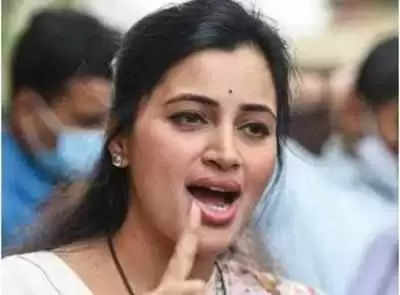 Mumbai: The Mumbai police have added the charge of "use of criminal force to deter a public servant from discharge of duty" in the FIR registered against independent MP Navneet Rana and her husband MLA Ravi Rana, an official said on Sunday.

The city police have also registered an FIR against several Shiv Sena workers for protesting outside the residence of Ranas in Mumbai on Saturday, he said.

The police had on Saturday evening arrested the Ranas for allegedly "creating enmity between different groups", after the couple cancelled their plan to recite the Hanuman Chalisa outside Maharashtra Chief Minister Uddhav Thackeray's private residence `Matoshree' here.

According to an official from Khar police station, the couple was shifted to Santacruz police lock-up in the night.

Earlier, Ranas were booked under Indian Penal Code (IPC) Section 153 (A) (promoting enmity between different groups on grounds of religion, race, place of birth, residence, language, and doing acts prejudicial to maintenance of harmony), and section 135 of the Mumbai Police Act (violation of prohibitory orders of police).

The police later also added IPC section 353 (assault or criminal force to deter public servant from discharge of his duty) in the FIR registered against Ranas, the official said.

Meanwhile, based on a written application submitted by Ranas, the Khar police also registered an FIR against Shiv Sena workers, under relevant Indian Penal Code (IPC) sections including rioting and unlawful assembly, for protesting outside the couple's residence here, the official said.

Navneet Rana, who is MP from Amravati in Maharashtra, and Ravi Rana, MLA from Badnera in Amravati district, had submitted a complaint at the Khar police station against Chief Minister Uddhav Thackeray, Shiv Sena MP Sanjay Raut, and Sena leader and state Transport Minister Anil Parab, accusing them of instigating people to 'kill' the couple.

Earlier this month, Ravi Rana had demanded that Thackeray, who heads the Shiv Sena, recite the Hanuman Chalisa at his residence on Hanuman Jayanti, and announced that if the CM did not do so, he would go to 'Matoshree' and recite it.

On Friday, Ravi Rana had said he would visit Matoshree on Saturday. But, as his announcement drew a strong reaction from Shiv Sena cadres, on Saturday morning he announced that he and his wife were cancelling their plan so as not to create any law and order situation ahead of Prime Minister Narendra Modi's visit to Mumbai on Sunday.

But, despite their backtracking, Sena cadres on Saturday laid a siege to the building in suburban Khar where the couple was staying, and said the Ranas would not be allowed to leave until they apologised for insulting Matoshree, their "temple".

The Sena workers had also tried to break through barricades and enter the building, but were stopped by police.